Noblesville is a city in Indiana, USA. It is the administrative center of Hamilton district, part of the township Noblesville . Population: 57,584. (estimated in 2014).

To the south of the city is the capital of the state of Indianapolis, with Noblesville included. The White River, one of the state's largest rivers, flows through the city. 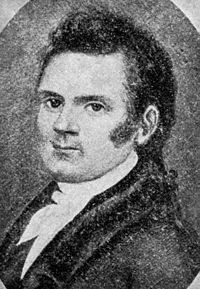 Senator J. Noble, after whom the city is named

In 1802, the place where the city is now located was settled by the entrepreneur William Conner Mekinges with his wife of the Delavar tribe. In 1823, together with Josiah Polk, he founded a town settlement, which a year later became the center of the newly formed Hamilton district. In the same 1823, a post office was opened in Noblesville, in 1827 the first church and tavern were opened.

The city's modern borders were determined by the decision of the district authorities in 1833. Noblesville, the city was named after American Senator James Noble of the State of Indiana . Noblesville developed strongly in the first decades, but there were black pages in his history as well: e.g. cholera epidemic in 1850, Great flooding in 1913 , The Great Fire of 1967. In 1851. Noblesville was incorporated .

In 1856 the first public library opened its doors, eight years later the city fair opened. In 1871, two significant objects were opened at Noblesville: city bank and fire department. In 1879 the building of the District Court was completed.

1888 marked the beginning of the economic boom for Noblesville, with the central and eastern parts of the state found natural gas. This event gave an impetus to the more active development of the city in all spheres - at the turn of the XIX and XX centuries a number of different objects were built: From the opera theater to the dam for the local HPP, the Noblesville Electric Power Company was established.

The city did not develop very quickly in the twentieth century, but from the 1970s until now (2016) there was a sharp increase in the population in Noblesville.

Noblsville has a number of attractions and recreation facilities for the city's residents and guests: 7 golf courses, Belfry Theater, many shops in the business center, music center, parks and squares (e.g. Forest Park and Park). James Dillon), art gallery, Indiana Transportation Museum and much more. Hamilton Town Center is the city's largest shopping center (founded in 2008).

Noblsville has sister relations with the following cities: